Including Children
Including Parents
Handfasting

You might think "Sand Ceremony!" if you're going to have a beach wedding, but have you considered it for other locations?

A sand ceremony is a suitable replacement for a unity candle if your wedding is going to be outdoors, where there is the chance that the candle flames might be blown out by wind, or indoors where open flames are not permitted.

A small sand ceremony would probably just include the two of you. You and all of your guests could participate in a big sand ceremony. Your sand ceremony is the perfect place to get other people actively involved with your wedding.

The symbolism of your sand ceremony is very visible as your sands blend, the sands symbolically blending your lives.

Each of you begins with a bottle of sand that represents yourself as an individual. There is a larger, empty container that represents your future life together. As you pour your grains of sand into the big container, we watch them intermingle, symbolizing the joining of your lives. Each of you leaves a little sand in your bottle, signifying that each remains an individual, as well as half of a couple.

Sand is used because it has very small grains, making it nearly impossible to separate the two original sources from each other. The symbolism is that the two of you will be as inseparable in your marriage as the grains of sand.

"Where Does the Sand Come From?"

Some couples prefer to use natural beach sand that they have collected from places meaningful to them.

Did you enjoy a trip to Cape Cod, and scoop up sand there? Did you bring some black sand from Hawaii? Or some red sand from Greece? If the colors of the two sands are very different, the blending is more visually striking.

Some couples favor using specially-colored craft sand, such as red and blue which combine harmoniously to make purple. Your theme colors could be echoed in your sand colors, or could complement them. Or the color of the combined sands could match one of your theme colors.

Usually glass bottles are used because seeing the individual colors, and then the combined color, is important. Some couples use clear plastic bottles to avoid any possibility of breakage. No matter what kind of container you choose for your combined sand, a cap or lid is strongly suggested.

We have been saying "bottle" here to refer to all the containers. You could easily decide to use a jar or vase for any or all of them.

Stacy and Brent, for example, had their initials engraved on their individual vases ("SLC" and "BAS"), and "Stacy & Brent 02-01-09" on the jar. (The photo does not show their initials clearly.)

You could decorate your sand bottles with ribbons of your theme colors, and perhaps interlocking hearts on the jar for the combined sand. How about a pair of lovebirds on the jar lid? Your imagination is the only limit!

If you're having a beach wedding, then simply scooping up sand from beside you may appeal to you. Would you like to use sea shells to scoop the sand and pour it? The combination of the two shells and the sand jar would make an attractive addition to a special spot in your home, which brings us to the next topic....

"What Do We Do with the Sand After the Ceremony?"

After the ceremony, the bottle of combined sand is usually sealed. Most couples give the container a place of honor in their home, such as on a mantle or on display in a china cabinet. Couples who have had handfastings sometimes drape the cords or ribbons around their sand bottles.

Doris and Melvin did something different. Because Doris had to remain in a convalescent hospital temporarily, I married them there. After the sand was poured into the vase and blended, it was poured back into their individual bottles. Each partner has a bottle with a foundation of their original sand with the mixed sand on top, filling the bottle. Each spouse keeps their sand bottle by their bedside, Doris in the hospital and Melvin at home. When Doris has recovered, the separate bottles will be combined again, to be at the couple's bedside in their home.

In the convalescent hospital it was especially important to use plastic bottles with twist-off caps to avoid the possibility of breakage or spillage.

Update: Thank you, everyone who has asked since Doris and Melvin's story was first told! Doris has fully recovered. After their delayed honeymoon, Doris and Melvin are living happily in their own home. 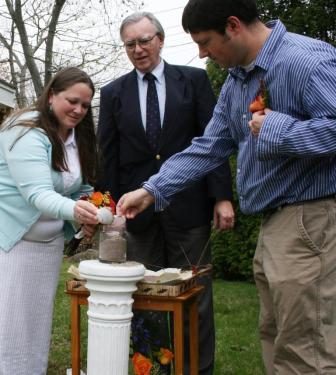 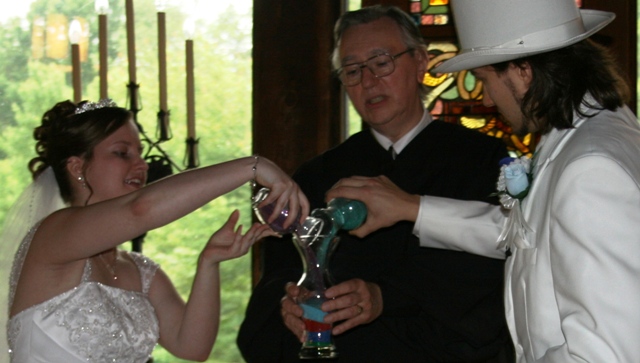 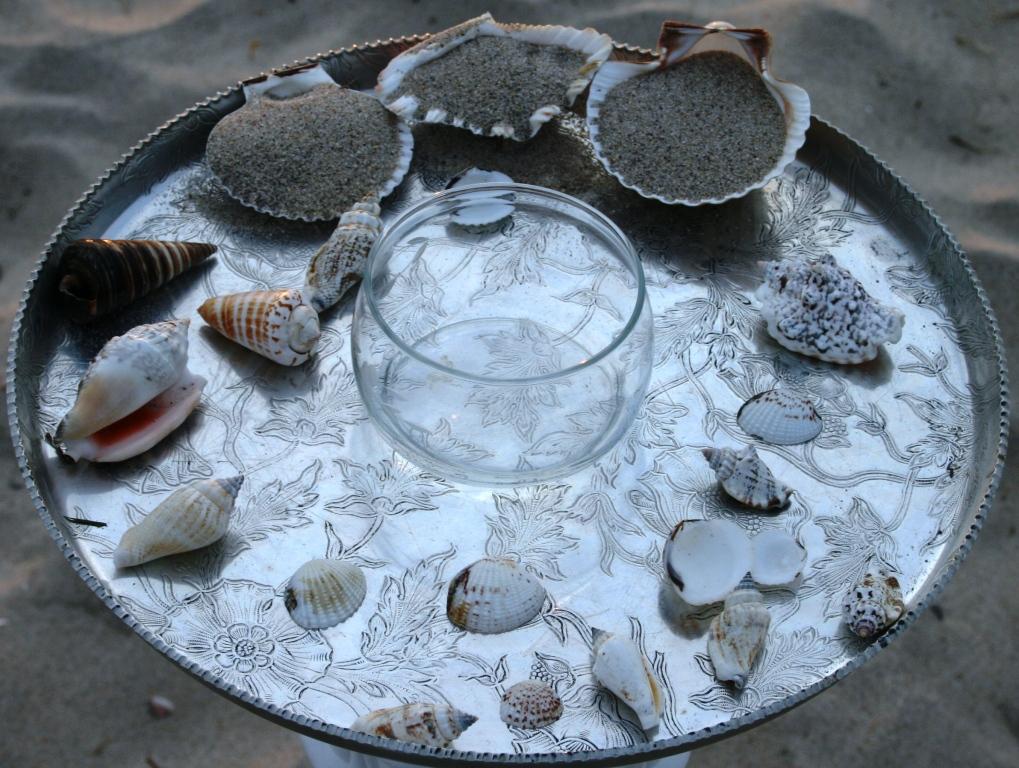 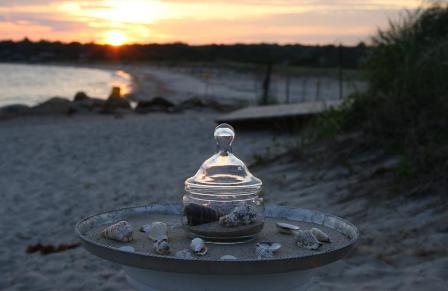 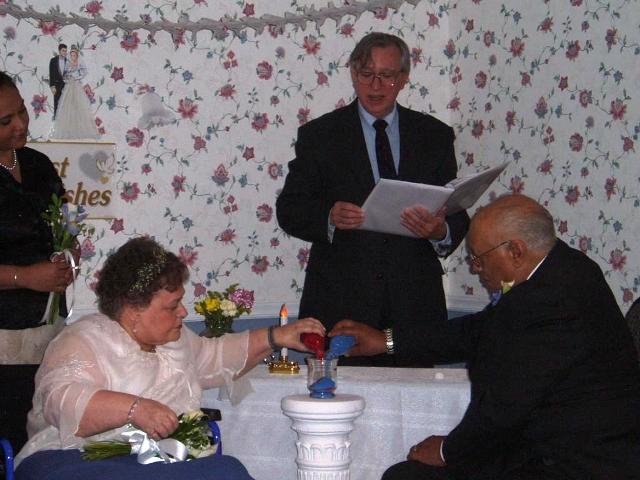 "Who Participates in a Sand Ceremony?": Involving Other People

Bring children into your sand ceremony to have a real family wedding.

65% of marriages include children from previous relationships.

In one of the photos above, the couple's sand is in scallop shells, with the child's sand between them in a different type of shell. The setting sun glinted off the shells and glass, adding to the beauty of this seaside wedding at Harkness Memorial State Park. After the sand had been poured, the child spontaneously picked up a shell and put it in the jar. The couple smiled and put in two shells. (See more seaside wedding photos at the Harkness Memorial State Park Page.)

Children often feel the need to be included, especially the child or children of a parent taking a new partner. Having a child participate by pouring sand into the big bottle is easy, safe, and is a wonderful opportunity for photographs that will be treasured for years. ("See? I was there and I helped!") What better symbol of a blended family than a Sand Ceremony with children?

Blending sands in a sand ceremony with children helps incorporate the children in your wedding in a meaningful way. Whether you are blending two parents and one child or two parents with several children, everyone will embrace the creation of a new family through the symbolism of your sand ceremony. Children are more likely to accept their parents getting married when the children are included in the wedding celebration. Adult children can also be included!

Special thanks to Justin Appi of Video Affair Photography and Video for the great photo of the Family Sand Ceremony at Water's Edge in Westbrook, Connecticut. You can see more of Justin's work at WWW.Video-Affair.Com. 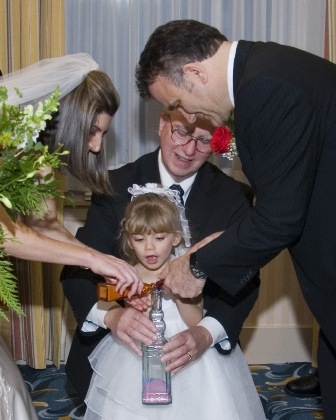 Including your parents in your sand ceremony is easy.

Some couples have their parents participate in their sand ceremonies by having them pour a foundation in the bottom of the big sand bottle. It symbolizes the love and support that your parents give you which will help you sustain your own marriage.

Your parents, friends, or relatives could bring your sand containers to you. This might be especially helpful in a location where it would not be convenient to have a table set up. In general, each half of the couple should carry at most one thing. More than that may cause confusion when you should be absolutely free of worries and stress.

If the number of people attending your wedding is small, you may want to consider having each person put a scoop of sand into your big bottle. Each person could offer their good wishes, either silently or aloud, as they poured their scoop. You would add your sands last, building on the foundation that your loving friends had made for you.

During their backyard wedding Cory and Dean had their parents build a base of sand first, then the rest of their guests add scoops of California beach sand or Connecticut beach sand.

Cory and Dean's guests each offered their best wishes for the couple. Some guests found it hard to speak due to their emotions. If people have trouble getting their words out, take it as a positive sign! That means that they care very much about your happiness.

You can probably just barely see the green sand at the bottom, which represented Earth. Blue was next, denoting Water. Fire was symbolized by red. Light blue stood for Air. Together, Bernadette poured purple sand while Kirill poured teal sand.

Bernadette and Kirill had both a sand ceremony and a handfasting as parts of their wedding ceremony. After their wedding, the cords were wrapped around the base of their sand container and put on their head table at their reception. Notice the table-top water fountain with small rocks, lighted candles, and glass pebbles, again echoing the Four Elements. 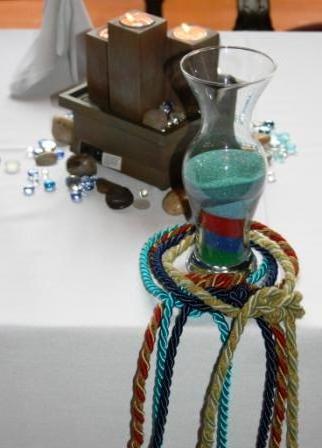