Including Parents
Including Children
Handfasting

Each of you begins with a taper candle that represents you as an individual. The unity candle (usually a large pillar candle) represents your new life together. Together you light the unity candle, symbolizing the joining of your lives. Just as it is impossible to split the flame, so your two lives are joined into one. Either both of you leave your own candles lit, signifying that you also remain individuals, or both of you blow out your individual candles symbolizing your total commitment to your marriage.

The unity candles available in stores range from simple to ornate. Jamie and John, for example, had a simple white pillar candle with a pretty bow around it.

The candles gave a nice glow as the sun set and it got dark.

Jamie and John had practiced lighting a candle together, so they very smooth when they lit their unity candle.

The light breeze caused the candles to drip some of their wax on the table. Jamie knew that this could happen, so she was not concerned about damaging a priceless heirloom.

It is often easier to light the unity candle with the taper candles firmly in their holders, rather than be concerned about removing the candles while they are lit and then seating them firmly again.

Some unity candles have verses, such as "This day I will marry my friend, the one I laugh with, live for, dream with, love." Manilyn and Jonathan had a unity candle with a cross and the verse from the Bible that begins "Love is patient and kind; love is not jealous or boastful...."

Manilyn and Jonathan had their wedding in Groton, Connecticut with approximately 50 guests. Like many couples, they wanted a ceremony that was spiritual and reflected the traditions of their families.

One picture shows clearly my attitude about professional photographers: Get out of their way and help them do their job!

Christina and Gene had a unity candle of an unusual design. It had two wicks that joined into one flame as the candle burned down. The top core can be replaced with a votive candle for continued use for years.

Christina and Gene's names and the date of their wedding were printed on their unity candle medallion.

"What if the Unity Candle Goes Out During the Ceremony?"

Don't panic! Taking such minor details in stride and keeping them minor is one thing that separates me from other wedding officiants. If any of your wedding candles goes out I have already prepared a way to use it as a positive message, adding to your ceremony rather than marring it.

"What Do We Do with the Unity Candle After the Ceremony?"

If a reception is to follow the ceremony, the unity candle is usually moved to the head table, or the sweetheart table if you are using one. Most couples give the unity candle a place of honor in their home, such as in an étagère or on their mantle. People who also have handfastings often coil the ribbons or cords around the base of their unity candle, as Jamie and John did. Lighting the unity candle on each anniversary has become a tradition for most couples.

Adding Other People to Your Unity Candle Ceremony

Your unity candle ceremony is a good place to get other people involved in your ceremony. Parents, friends, or relatives could bring your candles to you. Some couples choose to have their mothers light the tapers and pass the candles to them. If your ceremony is in the evening, you may choose to have each member of your wedding party carry a candle. (There are several styles of electric candles so that even the youngest person can have a light and still be safe.) Candlelight ceremonies are considered among the most romantic.

If you are blending families, you might consider having your older children join you in lighting the unity candle. Four is about the maximum number of people who can coordinate lighting one candle.

If you would like to discuss involving other people in your unity candle ceremony (or any other topic), please call me at (860) 543-2334. We can discuss what represents unity best to you.

When is a Unity Candle not a Candle?

D.H. and K.Y. had been given a modern glass oil lamp with their names engraved on it for a wedding gift. They decided to use it as their unity candle because it was especially symbolic that their love would last. They would just add scented oil to the container and the flame would be bright for years to come, just as their love would.

The flames on the tapers and the unity candle are real. Any time open flames are used there is a chance that something will be lit that should not be. Having a dress or other clothing catch fire will put a damper on your celebration.

You know your child or children better than anyone. Combining young children with lit candles may fall into the category "unwise idea". How about using an electric candle for them?

Caution needs to be taken if you are using a unity candle as part of your outdoor ceremony where there is a chance of wind or rain. In that case, I suggest that you use butane fireplace lighters instead of taper candles to light your unity candle.

If the breeze is very light, or the ceremony is in a sheltered area, you might consider placing the unity candle within a hurricane chimney or other glass container. Also, a breeze or draft may cause hot wax to drip from the candles, as it did for Jamie and John. 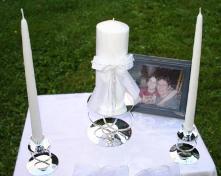 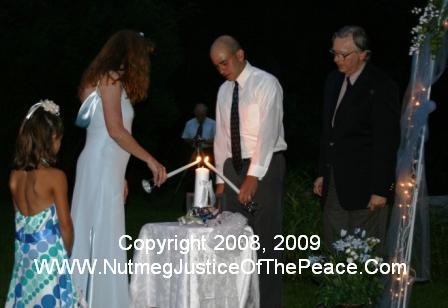 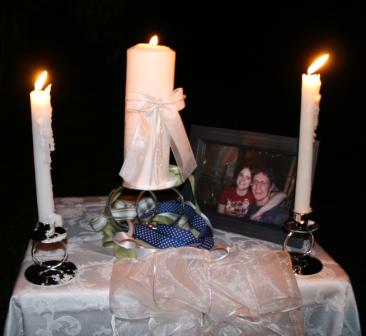 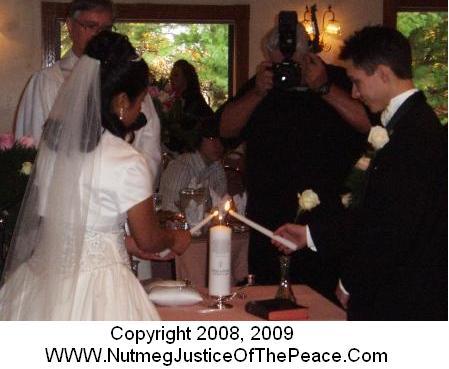 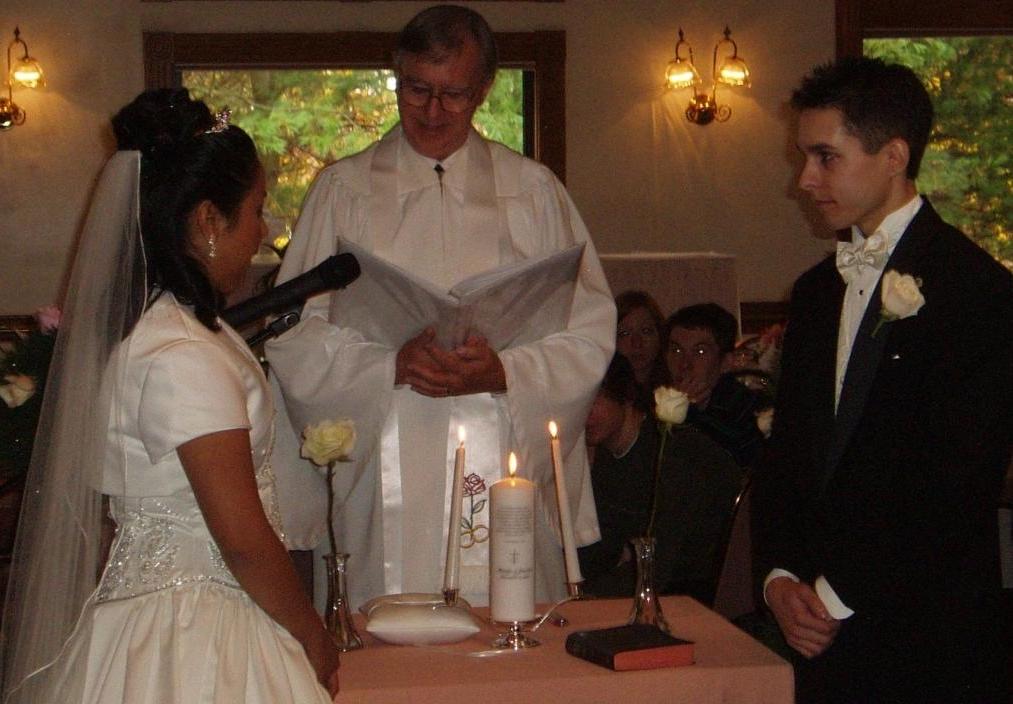 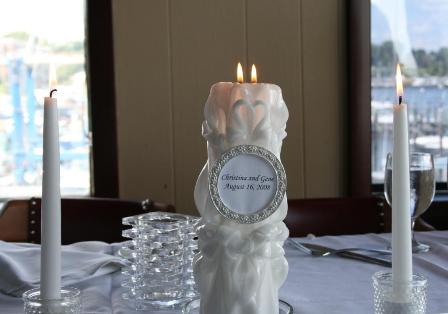 You are adults. It is extremely unlikely that there will be problems due to the use of candles in your ceremony. If the place where your ceremony is to be held requires insurance for the use of open flames, it is your responsibility to obtain and pay for that insurance. I will not accept any responsibility for any damage to any person or any property due to fire.