Have your beach wedding or flower garden wedding at Harkness Memorial State Park in Waterford, CT.

From spring through fall the gardens are in bloom, perfect for a garden wedding. Photographers love the Harkness Mansion, pergola, amphitheater, and fountains especially for wedding pictures.

It seems that Harkness always has gentle breezes blowing. Some couples have given their young guests kites as favors to fly while the older people danced. With acres of lawns and no power lines, Harkness is a very popular place for kite flying.

Rhiannon and Nathan held their black and white wedding in the Oceanside Amphitheater at Harkness. The bride's father had built a wedding trellis which was decorated with white roses and fabric. Allyn Bryson Donath played the harp, providing music from Bach to the 20th century. The weather was perfect: A gentle breeze kept the sun from getting too warm. The blue sky and sea contrasted well with the greenery and white sand; perfect for seaside wedding photos. The rustic wooden benches were covered with white fabric; black and white tubs of Chrysanthemums graced the bricks.

The flower girl and ring bearer were so cute! He was a gentleman and escorted her very nicely.

The guests blew bubbles in celebration while the bride and groom recessed from the Amphitheater up the aisle toward their waiting limousine.

Frank and Lyndsay drove up from New Jersey with their families for their beach wedding at Harkness. Lyndsay's family was amazed that she and her JP put the wedding together in just one day! Lyndsay's mother did a beautiful job reading from Kahlil Gibran. We combined Lindsay and Frank's sand ceremony with a shell ceremony, to everyone's delight.

The East Garden is a little more secluded than the West Garden, and probably better suited to a wedding with a small number of guests. The alcove at the north end of the East Garden was surrounded by lush greenery and topped by beautiful white flowers.

Special thanks to Nancy for taking the photograph of Arna and Greg!

Part of Eolia, the Harkness Mansion, is visible in the photograph of the north end of the East Garden. There is a raised grassy area that is perfect for a wedding ceremony!

Long Island Sound and the Atlantic Ocean are just barely visible at the south end of the East Garden. A slightly sunken garden and wrought iron gate open onto the great lawn.

On the east and west sides of the East Garden there are more gates. People have entered though these gates and met in the middle for their wedding ceremonies. The wall on the east side of the East Garden is high enough to conceal a waiting bride from her waiting groom, for example.

Other popular places for a wedding ceremony at Harkness Memorial State Park are the pergola and Eolia, the Harkness Mansion (some people call it "Harkness Castle"). The restored formal gardens are awash with color and pleasant scents, the lawns are well kept, and the seaside views include islands in Connecticut, Rhode Island, and New York.

"Do you have to rent the Eolia Mansion to get married at Harkness Park?"

No. You always have the option of renting the Harkness Amphitheater or having your wedding elsewhere on the grounds. If you rent the Harkness Mansion then you can use the pergola for your ceremony. (Some people call it the "Wedding Gazebo at Harkness" or "Pavilion at Harkness, CT".) If you do not rent the Mansion, you can use the pergola only for photographs, not your whole ceremony. The rental fee for the Mansion is a lot less than for a commercial wedding venue! In fact, the Mansion rental may be less than for other mansions along the Connecticut shoreline.

Dogs are permitted at Harkness as long as they are on a leash. Your dog is welcome at your wedding, just like the rest of your family!

If you're thinking of getting married at Harkness Park, ...

The State of Connecticut Web Site gives a lot of information, including more pictures, with a downloadable brochure specifically for weddings.

(Special hint: Jenny and Ethan [my daughter and son-in-law] held their wedding in the Harkness Amphitheater.)

Search the Web for "Harkness State Park Photos" and see many more photographs! 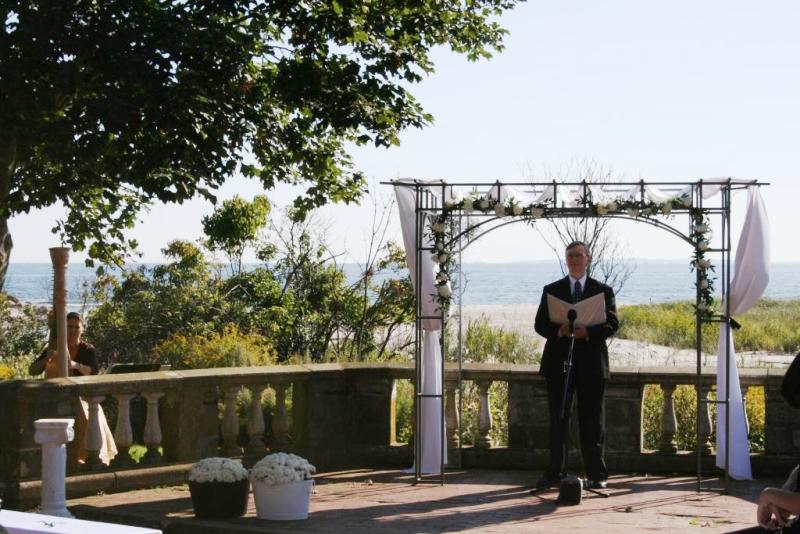 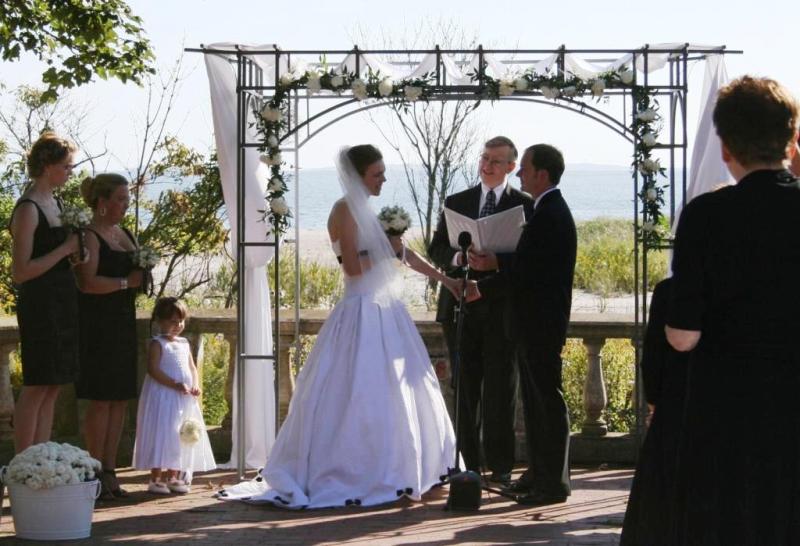 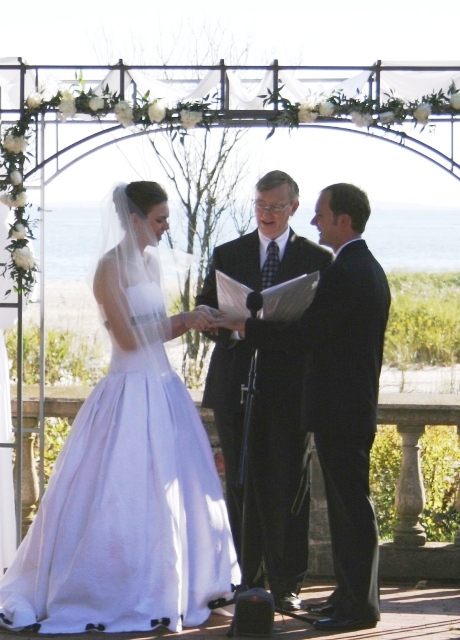 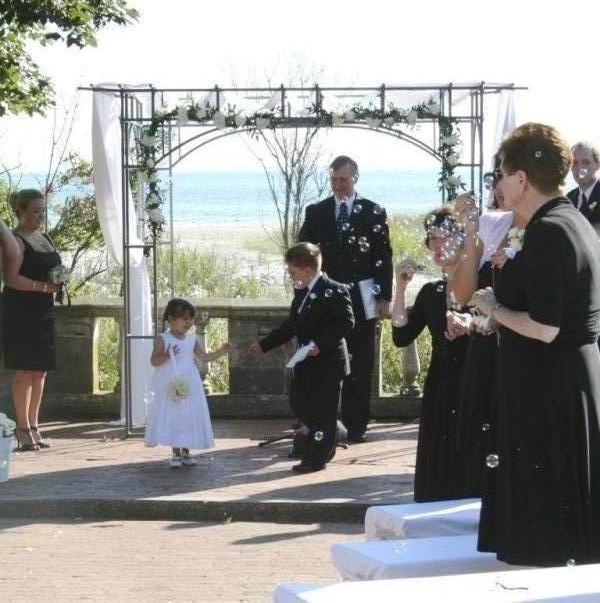 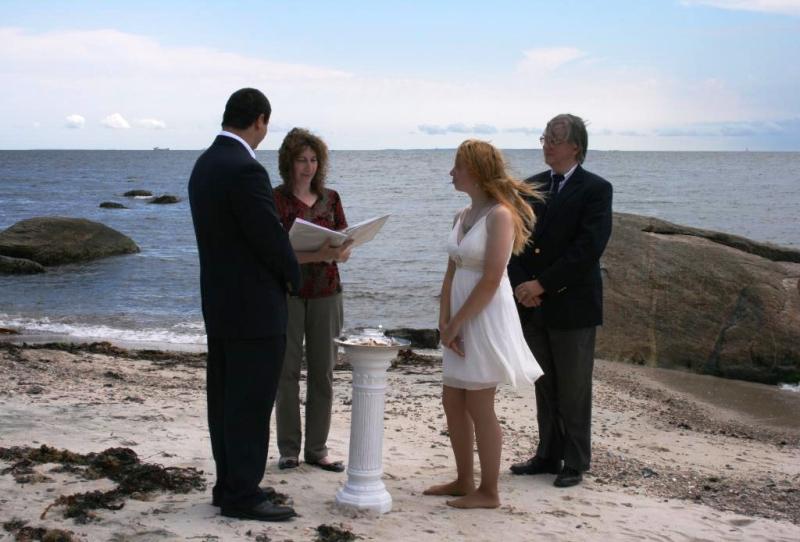 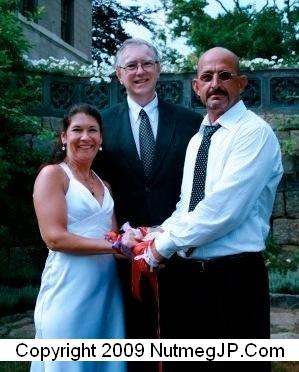 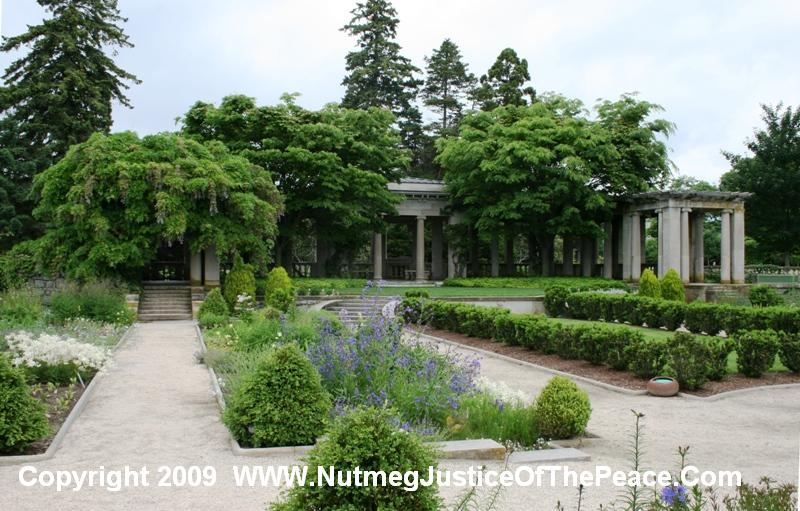